Online advertising companies like Google or Microsoft increasingly track users. They gather information about users, such as the websites they visit and their location, and use it to profile them and target ads. This has led to increasing complaints and calls for regulation from privacy and consumer protection groups. 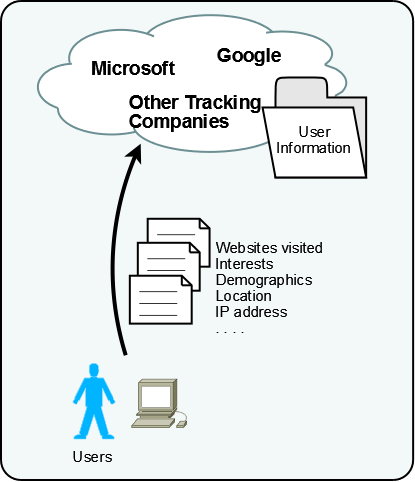 We are proposing an advertising system that doesn't track, and is therefore far more private. This system, called Privad, is based on two main principles: 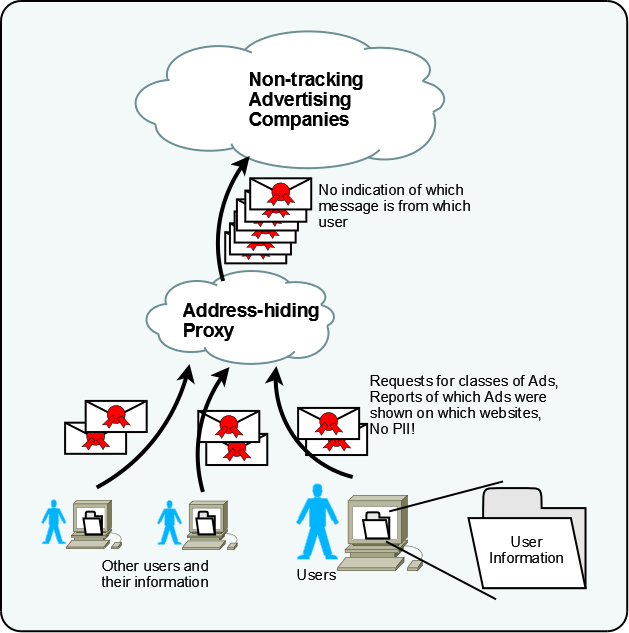 Rather than watch what you do from the cloud, as advertising companies do today, with Privad users run software directly on their computers. This “software agent” insures that each user's profile is kept only on his or her computer: the profile information never leaks out. The software agent is also responsible for showing ads. It anonymously gathers and stores the sorts of ads each user might be interested in. When users browse websites that have advertising space, the software agent on your computer selects an ad for you to view, and locally inserts it into the advertising space.

Q: How can I be sure that this “software agent” isn’t sending my profile to the advertising company?

A: The software agent is built in such a way that all communications in and out can be monitored by trusted third-party software. So, for instance, your anti-virus software could be modified to insure that the software agent is not sending out additional information.

Q: If the reports from the “software agent” are encrypted, how do I know they don’t contain private information like my name, gender, religion, and so on?

A: Sure, but if you can’t trust your anti-virus software, you are in trouble anyway. More generally, anybody who can get malware running on your computer can pretty much learn what they want. The software agent doesn’t change this one way or the other.

Q: Can't a government agency just legally order the intermediary and the advertising company to show it the decrypted reports and user IP addresses?

A: Yes, but if it can do that, it can just as well legally wiretap users from their ISP.

Q: Why would anyone install this software agent?

A: The software agent, or indeed a collection of competing software agents, could be supported by your browser in much the same way your browser toolbar supports multiple competing search engines today. The browser could provide basic protocol support and a framework for running Privad. Advertising companies could install their software agents into this framework, and compete with each other for advertisers, website ad space, and website profiling information.